Ross kicking goals with the help of support worker Lee

Mobile phone technology has opened up a whole new world for Activ customer Ross, enabling him to independently connect with family and friends, listen to the music he likes, find out information, take photographs and do online shopping.

Two years ago, these activities weren’t possible for Ross as he didn’t have a mobile phone, or the confidence to use one due to his literacy levels. This soon changed with the proactive support of Activ Support Worker Lee Hoffman.

Lee has been a support worker with Activ for 17 years and has worked with Ross in different roles.

“Around two years ago, some of Ross’ friends got mobile phones and this sparked Ross’ interest in getting one for himself,” said Lee.

“I arranged for Ross to visit to the Independent Living Centre WA (ILC) to look at specialised phones that may be suitable for Ross, however none of the options sat right with him.

“I had an old Samsung phone at home so I asked Ross if he would like borrow it as a starting point, which he did. From here, I showed Ross how to get onto the internet and we got assistance from the ILC with putting photos to phone numbers and adding these to the home screen so that Ross could easily call his friends and family.”

“I did a lot of research at home and was then able to teach Ross other things like how to use the microphone to speak to Google so Ross can ask for information and look up music.” 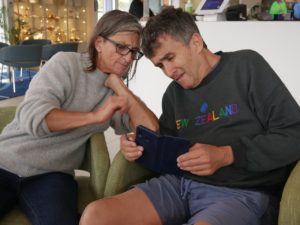 Earlier this year, Ross bought his own phone and he now has the confidence to call his friends and family in New Zealand, in the country and locally. He also uses Facebook, again using the microphone function, and regularly posts photos and updates about what he’s been up to.

“My sister lives in New Zealand so I like to check the weather where she lives every day. I also like to listen to music on YouTube and Spotify. I like music from New Zealand, pop music and Christian songs,” said Ross.

“My phone has given me more independence, it makes me want to do more and I can make my own phone calls.”

Ross’ mum Margaret said the mobile phone has done far more for Ross than she could have ever imagined.

“Overall Ross’ confidence with technology has grown and he’s more willing to give things a go. It has opened up a level of independence that he didn’t have before.

“I often hear Ross in his room chatting to his phone and listening to the music he likes, which makes me so happy.”

Lee is continuing with her research so that Ross can be even more independent with his phone.

“The next step is for us both to learn how to use screen reader technology so that we can have the text converted to speech.

“At the moment I read out the messages or information that Ross receives on his phone, but his goal is that he can do this independently by having the written messages and information converted to speech. We are learning this together,” said Lee.

Ross’ phone enables him to share his life and engage more with family and friends.

Through his love for pottery, cooking, holidays (Ross recently holidayed in Hamelin Bay) and volunteer work with a therapy miniature horse called Shadow, he certainly has a lot to share.

We can support you to explore your interests, achieve your goals, and live more independently, just like Ross. To find out more about Activ’s community services, contact our friendly Customer Engagement team via email at hello@activ.asn.au or on 08 9387 0555.