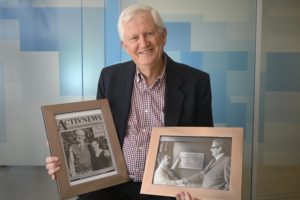 Established in 1951 by a group of families who wanted more for their children, Activ has a proud 70-year history of supporting people with intellectual disability to achieve their goals, break through barriers and increase their independence.

Ken Booth, a founding and current member of Activ’s council and a member of one of Activ’s founding families, has been involved with Activ since the 1960s. Ken’s brother David lives in an Activ shared supported accommodation home and has received services with Activ for over 60 years, giving Ken unique insight into the ways Activ has grown and evolved over the last seven decades.

“David was born at a time where there weren’t the resources and services that we take for granted now, in terms of organisations that support people with intellectual disability”, said Ken.

“Activ was at that time, a family-driven member organisation, so our parents, and all the other founding parents, were trailblazers for what Activ has become.”

Ken has seen Activ grow from an organisation run by families for their children, to one that now supports over 1900 individuals with disability across Western Australia, offering services in accommodation, community, employment, NDIS pre-planning and behaviour support.

Ken explains that Activ began to evolve in the 1970s and 1980s from a member-based group to a more formalised and autonomous organisation, held accountable for funding that the organisation received. With this, came a shift in vision that reflected modern attitudes about people with disability.

“I think it’s very important that we recognise Activ’s history. I’ve seen Activ grow into a much bigger organisation with all its different arms and have seen a change in focus from ‘occupation’ of the individual with disability, to now ‘empowerment’ of the individual,” said Ken.

With Activ’s involvement, David was one of the first people with intellectual disability in WA to have access to 12 years of schooling. After school, David became an Activ supported employee, where he took pride in his work and loved making friends with his colleagues.

David moved into one of Activ’s shared supported accommodation homes over 30 years ago, where previous assumptions about David’s capabilities were left behind, and he was encouraged to become more independent at home. Ken says that the support that Activ has provided David over the years has been invaluable.

“My family has had a lifetime connection with Activ, who have provided support at all points of David’s life. As David’s life has evolved, Activ has been there.”

As a member of Activ’s council, Ken is excited about Activ’s future as the organisation heads into its eighth decade, and celebrates the fact that people with disability in our community now have more opportunities to achieve their goals and greater independence.

“It’s amazing to see now the achievements and capabilities of Activ’s customers, and I think that it’s a great celebration of how society’s moving forward,” said Ken.

“When David was a child and we’d go out as a family, people would stare at him. Now, people just talk to David, in the same way they’d talk to me, because people with disability are a part of our community.”

“Organisations like Activ, and their founders, have made that possible.”