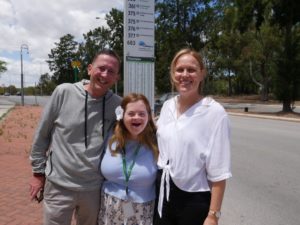 Activ support worker Rachel Thomas has been nominated for a WA Disability Support Award 2021 in the category Excellence in Supporting Inclusion and Citizenship.

Rachel was nominated for the support she has provided to Activ customer Mikaela, to enable her to achieve her independence goal of catching public transport to Activ Community Services (The Heights), where she visits twice a week to take part in a wide range of activities.

To get to The Heights Mikaela needs to catch two buses, and it was her goal that she could do this on her own. Rachel worked with Mikaela to achieve this. Rachel worked from a strength-based perspective, where she worked closely with Mikaela to work out what her strengths are and how these could be used to help her achieve her goal of catching public transport.

The steps Rachel took to support Mikaela to independently catch public transport to The Heights were:

In addition, Rachel contacted Transperth to see if there were any apps that could support Mikaela’s travels. Through her research, she found out about communication cards, which support people to communicate with Transperth personnel. The card has two sections where you can write information about where to stop and what you need help with. The passenger can provide this card to the driver when they get on the bus.

Whilst Mikaela gives the communication card to the driver every time she travels, they have rarely needed to support her as she always remembers to press the bell at the right time.

Mikaela’s mum Michele said Rachel went above and beyond to find a solution that works for Mikaela specifically.

“Rachel is very proactive and she’s just all about inclusion, in whatever way that works for Mikaela. When she interacts with Mikaela, it’s very much like a peer communication and she treats Mikaela like an individual,” said Michele.

“She just comes from a place of ‘this is right and proper and this is what should be done’, and she is determined.”

Michele said that through Rachel’s support, Mikaela’s confidence has increased and she knows what to do if things don’t go to plan.

“Not only has Rachel supported Mikaela to be able to catch public transport to The Heights, but she has also helped to make Mikaela so confident, that even if there are hiccups with catching public transport, she is calm and doesn’t freak out.

“Mikaela feels like she’s a little more part of her community now that she’s able to have this kind of access. She has become so confident with catching public transport that she recently showed some of her friends from The Heights how it’s done – together they travelled to Elizabeth Quay and that day caught seven buses, one train and one ferry.”

“We need people like Rachel working in disability services; the support she has provided to Mikaela is just one example of how she taps into people’s strengths, goes above and beyond, and supports people with disability to ‘dare to try’ so that they can achieve their independence goals, whatever they may be,” said Tony

“I believe Rachel would be a worthy recipient of the Excellence in Supporting Inclusion and Citizenship award.”

Check out this video about how Rachel supported Mikaela to achieve her goal of independently catching public transport to The Heights.

Congratulations Rachel on your nomination.  At Activ we are proud to have people like Rachel on our team. If you are interested in joining our team, check out our Careers page.