Activ customer John has gone from strength to strength to achieve his goal of independently catching public transport to work. This was made possible by Activ support worker Heather, whose dedication to listening to and encouraging John since she started working with him in 2018, has made a world of difference to John’s independence.

John is a supported employee at Activ Employment Services Rockingham, and a few months ago decided that he wanted to become more independent and get to work by himself.

“On Sundays John and I clean the house and have a coffee outside, and he mentioned that when he was living with his mum and dad he used to catch the bus,” said Heather. This was the conversation that kick-started the process.

As a stepping stone to catching public transport, John used All Aboard, a bus service specifically for people living with disability. This was a great first step for John as he built up his confidence and re-acquainted himself with catching a bus to work. He also loved that the drivers gave passengers chocolate and biscuits!

Soon after, John decided he wanted to try using Transperth buses again. “My sister was the one who said to me that I should give it a go. She wanted me to try,” said John.

John was at first a little wary of using Transperth buses, as he had unfortunately previously felt unsafe to ride the bus by himself, after some negative experiences with members of the public. Heather’s guidance was monumental in re-building John’s confidence, as she dedicated time to teaching John how to stay safe.

“It was a lot of encouragement at first, and teaching John some skills on what to do if anyone approaches him,” said Heather.

“After that, we practiced catching the bus to go to John’s basketball games every Tuesday. We were even approached by someone once at the bus stop, and John was able to use the skills that I had taught him.”

Heather and John then agreed that John was ready to try to catch the bus to work.

“To go to work, we only did two trips together before John was ready to try to go by himself, and I could see that John knew how to do everything,” said Heather.

For a few months now, John has been successfully getting to work independently using public transport.

Heather’s support style, focused on listening and getting to know the individual, was the driving force in seeing John kick his independence goal.

“I spend time with everyone and I listen, because a lot of the time it’s more about listening to their life stories. That’s how I get to know the customer and get to know what they’d like to achieve,” said Heather.

“I have absolutely seen growth in John since I started to support him. He’s very independent, even around the house, he helps everyone out.”

Looking to the future, Heather is always looking for new ways to gently nudge John to strive for greater independence.

“He has grown quite a bit, but we’re always striving for more. Today we were talking about catching the train to the city.”

We can’t wait to see the next journey John embarks on!

We can help you to achieve your goals, and live more independently, just like John. To find out more about Activ’s accommodation services, contact our friendly Customer Engagement team via email at hello@activ.asn.au or on 08 9387 0555. 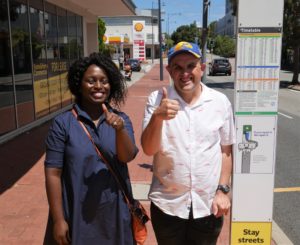