Community customer Michael is kicking his independence goals after securing a volunteer work placement at a local Vinnies store.

One of Michael’s friends at Activ’s The Heights community hub works in open employment, so Michael came to support workers Adele and Angela and said he also wanted to give working a go! Angela and Adele spent time to find the best fit for Michael, somewhere where he could learn new skills on the job and have a support worker with him.

As Michael had volunteered at Vinnies quite a while ago, Angela and Adele spoke with the store manager, Helen, who was more than happy to offer Michael a volunteer work placement. Since the end of November, Michael has been working at the store on Thursdays with the support of Adele, and is loving it so far!

At the moment, Michael is most comfortable behind the scenes, unloading new stock, putting price stickers on the toys and DVDs, performing quality control on new items that are donated, and hanging clothes.

“Michael now knows the different types of hangers for different clothes, and he knows how to wash the glassware and empty the bins unassisted. He also makes his own tea for morning tea,” said Adele.

Michael’s favourite part of the job? “I like buttoning the shirts and putting the price stickers on the toys!” said Michael.

But it won’t stop there. Adele gently encourages Michael to regularly challenge himself by trying new things and growing his skills, with support, when he needs it.

“He’s getting more confident as we go along. Recently, we were in the front of the shop replenishing the DVD’s on the shelf. Michael’s also made friends with other volunteers, so the next step is to start greeting and communicating with the public and I encourage him to do that now.”

Adele’s encouragement has made a world of difference, with Michael recently commencing work in the front of the shop, greeting customers and reminding them to check-in using the SafeWA app. Michael is happy and proud to be taking up this important job to keep Vinnies shoppers safe.

Vinnies Bassendean Store Manager Helen Sandery loves having Michael on the team and recognises the importance of providing employment opportunities to people living with disability.

“Michael is a pleasure to work with and I have seen how he’s grown in independence.

We want to foster a diverse, inclusive and progressive environment at our Vinnies stores, and I urge other businesses to be open to providing opportunities for people living with disability – it is extremely rewarding for both parties,” said Helen.

Looking to the future, Michael’s goal for the year is to keep working in the front of the shop, greeting customers and putting clothes on the racks. With all this progress in just a few months, we’re sure Michael’s journey to more independence at work is only just beginning. 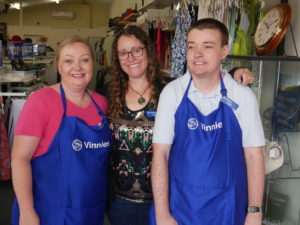