Mikaela makes her own way to The Heights

Support Worker Rachel has been working with Activ customer Mikaela to achieve her independence goal of catching public transport to Activ Community Services Alexander Heights (The Heights), where she visits once a week to take part in a wide range of activities.

Although Mikaela is familiar with catching the bus to Inglewood Community Hub, the journey to The Heights was not one that she had ventured on before and one which took longer than her previous travels.

“To get to The Heights Mikaela needs to catch two buses, and it was her goal that she could do this on her own so I’ve been working with her to make this happen,” said Rachel.

“First we had to plan the bus route together. Mikaela needs to catch one bus to Morley bus station and then transfer to another bus, which takes her to a stop near The Heights.

“Because it’s a 40-minute trip, we needed to work out a plan so Mikaela knew when to get off the bus as it’s easy to drift off on a longer trip and to get disoriented. I travelled with her the first few times and pointed out landmarks that we always passed to provide some familiarity and to give Mikaela a sense of how far into the trip we were. 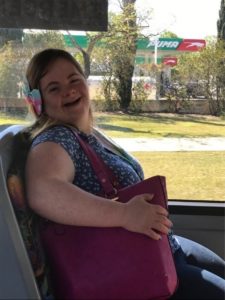 “We also set an alarm that would go off on Mikaela’s phone when we reached the shopping centre near her stop, to alert her that it was nearly time to get off the bus and that it’s now time to press the bell. I found this worked quite well, especially when I started sitting back from Mikaela and just being there at a distance.”

Rachel researched the Transperth app and enquired with Transperth about whether the app had the capability of setting an alarm automatically for particular trips to notify a passenger that it’s time to get off the bus. The app doesn’t have this capability however Rachel has given Transperth this great idea to follow up!

Through her research, she found out about communication cards, which support people to communicate with Transperth personnel. The card has two sections where you can write information about where to stop and what you need help with. The passenger provides this card to the driver when they get on the bus.

“Through catching the bus with Mikaela, I also got to know some of the regular bus drivers. One of the drivers suggested that it might be a good idea for Mikaela to sit near the front of the bus so the drivers remember that they might need to remind her when to get off.

“After catching the bus together for a few weeks, we decided Mikaela was ready to give it a go on her own. I was at my daughter’s assembly the first morning that Mikaela caught the bus to The Heights independently and all I could think about was how she was going. When Tony (my team leader) messaged me to say she had arrived I couldn’t wipe the smile off my face.”

Whilst Mikaela gives the communication card to the driver every time she travels, they haven’t needed to support her as she always remembers to press the bell at the right time.

Mikaela has become so confident with catching public transport that she recently showed some of her friends from The Heights how it’s done – together they travelled to Elizabeth Quay and that day caught seven buses, one train and one ferry, a big day out!

We can support you to explore your interests, achieve your goals, and live more independently, just like Mikaela. To find out more about Activ’s community services, contact our friendly Customer Engagement team via email at hello@activ.asn.au or on 08 9387 0555. 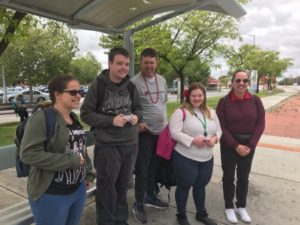