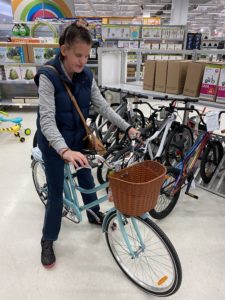 Activ customer Tamara has literally been dreaming about riding a two-wheel bike since she was a child. Recently, she achieved her dream.

Bunbury Support Worker Sue Ietto said that Tamara, who lost her sight at the age of nine, has always wanted to ride a bike but she hadn’t had the confidence, encouragement or opportunity to do so until recently.

“When I picked Tamara up one morning, she told me she had another dream the night before about riding a bike, a dream she often has. Together, we decided now was the time for Tamara to start working towards this goal.

“As part of the process I explained the risks involved in trying this activity, but the risks did not deter Tamara and it was her decision to give bike riding a go, knowing what the risks are,” said Sue.

Sue assisted Tamara to access a local bike maker, where Tamara first tried a three-wheel bike to help build up her confidence, before moving on to a two-wheel bike.

Sue supported Tamara by first teaching her how to balance and then how to stay in a straight line.

“Tamara basically sat on the seat and used her feet to push herself along, which helped her learn to balance. The next step was for me to hold the back of the bike and position Tamara in the middle of the road – it’s a quiet road which doesn’t get used by cars often.

“I would talk to Tamara by guiding her which way to steer, I’d call left or right or stay in the middle. This worked OK but we realised it would work better for her to follow sound. I then began playing music and told Tamara where to follow the tunes. Tamara soon began to learn to balance as well as focus on where the music was to follow and stay in a straight line,” said Sue.

“After balance was accomplished, Tamara would place one foot on the left pedal and push and glide, then place both feet down – this continued for the first day. The next day we repeated the process but introduced a different two-wheel bike with thicker wheels. Tamara was able to pedal two or three times, then stop and balance again. Then she progressed to four, five and six pedals and off she went.”

Tamara said she was thrilled with her achievement and felt a sense of freedom when she was riding the bike.

“I was able to ride the bike for around a minute, so it’s a work in progress. But for that minute I felt freedom; it was an amazing feeling that I could do that.”

Tamara is working towards being able to get her own bike so that she can practise riding more regularly.

Another goal Tamara is working towards is being able to walk into town independently and she’s begun her journey of being able to achieve this.

“I’ve started walking into town and currently I have someone follow me. I’m also training my family dog,” said Tamara.

Sue said Tamara’s determination plays a huge part in her achieving her goals.

“She forever amazes me, she can do anything she puts her mind to.”